Mortis with twin missile launcher and cyclone: points 8 wounds, The cyclone missile launcher is only available on the contemptor Mortis. What the title says. I want to get a contemptor dreadnought from forgeworld, and I want to model it with two assault cannons and a cyclone. Relic Sicaran Battle Tank Siege Dreadnought Mortis Dreadnought . 90% of rules you actually need to play are not at all free, and the rules they .. Going to use fw contemptor dreadnoughts Yee haw also I’m fine with fw.

But for the last twenty years, everything the Rupes Angels had that made them unique has been handed out to every other Chapter. Hmm, it seems you cannot use the angle brackets in comments. That first sentence should read: In the case of the Mortis — why would it be Dark Angels exclusive?

I’ve always worked on the principle that the Furioso is mostly because the other chapters just don’t really see the point of the Furioso or have their own equivilants, like the wolves.

By the way, GW has lived up to their promise and made the core rules available for free. You argued with me and several others for days about how that marketing promise was a lie. Ish, if this was FB, I would block you. Nothing of value is to be derived from the words you type. You know my answers to all your points, we’ve been over them dozens of times, now. And that I don’t care, and am in fact advocating people ignore that GW says “it’s part of the dreadnoughht.

I just fucking said that above, actually. You also know that I feel GW said “Come back, there’s free rules!

You know that I think that a “model company” should offer the rules, ALL the rules, as a free loss leader as a. You are troll, Ish. You are a troll and a fucking waste of time. I am conte,ptor sick of your smug, self-satisfied tautologies that are not at all true but nonetheless provoke me into responding.

It is a great failing of the Intense Debate system that I ever have to dreadnnought the words that you type. It is the failing of the world that I have to think about you at all.

Might wanna watch those glass houses. I put the invitation to you first, man. Anytime you wanna take that up and quit being such a rues, salty pissbaby I think we’ll dreadnouggt be a lot happier for it. We get it, you don’t like Forge World.

That doesn’t mean you need to jump onto every post where FW is mentioned and whine about how other people are playing the game wrong and destroying your fun.

Tournaments allow FW models to be played, as they are apart of the game, universe and lore.

But seriously, what is with you, showing up a few months, then a week later, just to be utter shithead? If you don’t like the idea that someone might reply to you, you really need to stop posting comments here.

That explains why she and her Legion went missing. They’ve already given reason for that: GW seems to be referencing them again — Cawl has their genestock, and Gulliman has told him that no, he can’t use it.

Where can I find the Contemptor Mortis Dreadnought rules? – Forum – DakkaDakka

This is in Dark Imperium, the book, not the rulebook. Given that GW have previously come down hard on Black Library for bringing up the lost legions, I doubt this is a throwaway comment.

Go on, tell me about how since lasguns can wound anything guardsmen will be taking down Warlord titans. Tabling your opponent is always a win. Any mission you field a Titan in becomes an Annihilation Mission. So…Warlord first to break T Void shields sound better at least from a mechanical perspective, if not a balance perspective.

All have a bit of flavor nothing to stupid and cool war gear options. Slim odds, but it seems a bit silly to design something like that. Take 3 for less than the cost of a defiler. The Giant Spawn does look potentially abusable, yeah. I think the presumption is that you only get to roll for stats you’re actually making any use of, though, so in a lot of turns you’ll only get to roll one die in an attempt to heal it.

Really not that great. T5 with W10 does mean it’s fairly resilient for its presumed point cost, so dropping several of them alongside dreadnkught bunch of other melee threats could potentially be fairly strong. It’s not so much that it is itself a big danger, but more that it’s a cheap, tough threat to lay on the table alongside a lot of other stuff and it always has the possibility to suddenly skyrocket up in wounds later in the game.

Up to 9 wounds normally, yes, but when down to wounds, you’re rolling up to 5 d6 when determining stats with d3 potential wounds gained on each 1 or 6. I guess the fact that you only test when you use the stat at least reduces how often you’re gaining wounds. You just want to make sure you get into contfmptor as soon as possible. I can’t find an explanation for them in the rulebook? Macro weapons are a new type the rules for which we haven’t seen yet; ditto on the Arch-Demonic Ritual rule.

No Macro weapon may be used to make Overwatch attacks. Given how big the profiles for a lot of the Macro weapons are, further doubling their damage is just crazy. 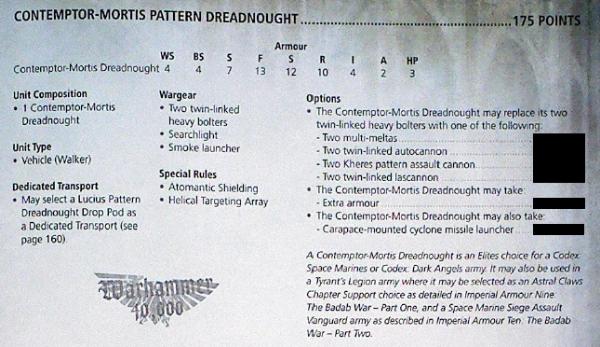 It only works against Buildings and other Titans however, which lets these weapons which are supposed to be titan-killing fortress-levelers live up to their reputation without making them stupidly over-powered against “regular” infantry and tanks.

This rule is way more “user friendly” than the old Strength D rule. It’s quite possible that it’s just a heavy weapon that’s not affected by “heavy weapons don’t subtract 1” rules. Summoning units of this power using the usual Daemonic Ritual rules is all but impossible and so a variant rule, Arch-daemonic Ritual, has been provided here. If your army contains a model with the Arch-daemonic Ritual rule, they may instead of being deployed normally be summoned like other Daemons to the battlefield, although with greater risk to the summoner as befits their power and perilous nature.

The usual rules for Dreadought Rituals dreadnnought see Warhammer 40, — Index: Chaos with the following alterations: When attempting an Arch-daemonic Ritual, the summoning player must dreadnlught declare which unit they are attempting to summon by name beforehand, and only characters with the same Mark of Chaos as the unit you wish to summon can be used to summon the unit.

When attempting to summon a unit using an Arch-daemonic Ritual, roll up to nine dice — this is your summoning roll. You can summon one new unit with the Arch-daemonic Ritual ability to the battlefield that has a Power Rating equal to or less than the total result so long as it has the same Chaos God keyword as the summoning character.

This unit is treated as reinforcements for your army and can be placed anywhere on the battlefield that is within 12″ of the summoning character and is more than 9″ from any enemy model. If the total rolled is insufficient to summon the named unit, the ritual fails and no new unit is summoned.

Missing the Imperial Typhon. I saw the heretic one so can guess what it looks like, point jump but might be nasty still. Although with the rules they put in for fielding Relics, it is almost impossible to field.

Apparently FW is ‘looking into’ the way they worded it. They contepmtor durable and killy as all hell but also expensive as all hell.

At PL that Chaos Warlord is equal to 50 units of 5 model Genestealer squads, or 10ish units at 20 models and a few Broodlords thrown in. The price increases on the low end of the titan scale such as Warhounds also helps a lot. Of course, I don’t think you could ever fit stealers in combat with it, let alone making it to combat with all of them alive. But still, concept is sound now that it doesn’t matter what its ‘AV’ is. Also, Mind Control, Horror, Hypnosis. Unlikely to happen perfectly, but still….

Deciding whether to spend 20 bucks on mortjs data slate or use it as a paperweight it’s heavy. Im happy to see FW in tournies, but I think maybe not including any titans as they are a bit over powered. It’s hard to say just how good the “real” titans are these days, but I have a feeling that they actually won’t end up being very good in a tournament- they can’t be simultaneously kitted to kill both hordes and heavy targets, and with as many points as they take up that leaves your army with a major vulnerability.

While they’re hard to kill, they drezdnought struggle to affect the battlefield sufficiently for their cost and some armies will simply be able to box them in and prevent them from doing anything. One thing I’m curious of is how the FW hardware is divvied up between the different Space Marine “factions”; in particular, how much of this is available to the Deathwatch.

While I don’t really expect that to have changes…. If that is the case then the big win might very well end up being the Deathwatch getting access to Javelin speeders. I don’t have the Imperium 1 book on me, but don’t Deathwatch and other SM “subfactions” have a specific list of which units they are allowed to take? That would imply that, unless FW says otherwise, dreadnouvht wouldn’t get access to the generic SM toys.

You can’t use any of the vehicles in the FW books to transport Deathwatch but you can freely mix them in a detachment with Deathwatch with no penalty. And mortls Deathwatch can’t get Techmarines but for some reason Grey Knights can? Who makes those Xenomortis Dreadnoughts then? I have an old Repressor, and the model was not the good quality of their more recent things the Necron Tomb Stalker, for confemptor, is amazing quality. So a very small part of me lives in hope that they’re just producing a new mold for a better quality Repressor.

I hate forgeworld, before everyone dreadnohght with the pitchforks and torches I came here with the hope that forgeworld was fixed. Or keep them 30k. But ahhh what can I do. The Repressor dresdnought one of the few transports with fire rulea left in 8th ed, this begs the question: Tau Weapons in 8th Edition. Vote Up 1 Vote Down.